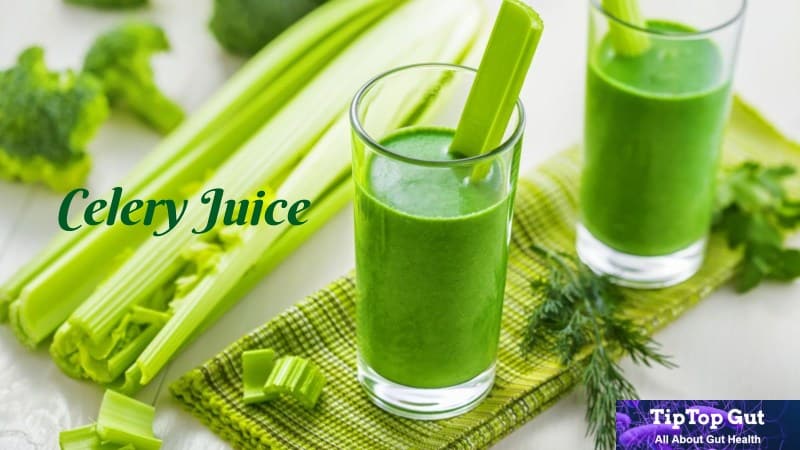 Consuming celery juice, which is high in nutrients, may have numerous health advantages. Juice from celery can be consumed as a healthy habit. It contains digestive-supporting properties and won’t cause your blood sugar to increase.

According to one study, drinking juice made from various vegetables and celery improved gut health by reducing the number of microorganisms linked to inflammation, autoimmune disorders, and obesity and increasing the number of commensal microbes, which are good for you.

Although the word “stomach acid” may sound unpleasant, it is necessary for gut health. Hydrochloric acid in the gut breaks down food so your body can digest it more quickly and effectively. Celery provides characteristics that assist restore this acid.

Our mucus wall thicken with the number of germs in our intestines, providing a more substantial barrier between our body and the active bacterial population. The mucus barrier reduces inflammation throughout the body, while the bacteria promote digestion, providing a win-win situation.

Celery juice’s “undiscovered sodium cluster salts,” claims Medical Medium, are its secret ingredient. These salts are said to be able to heal chronic illnesses. The fundamental explanation for the beverage’s potency and the Medical Medium’s insistence on celery juice’s miraculous properties is due to this discovery.

According to legend, germs are broken down and flushed out by these salts. This juice works in this way to help the body detox the liver, battle autoimmune illnesses, clear up acne, and prevent SIBO and the shingles virus.

Best Probiotic for Vaginal and Gut Health: The Best Guide 2022

Luteolin, a substance, lies at the heart of the buzz surrounding celery juice and the digestive system. A study published in Nutrition Research Reviews discovered that luteolin is present in celery and in carrots, peppers, olive oil, peppermint, and rosemary. Additionally, it is recognized to have beneficial health effects in the gut and elsewhere.

Luteolin promotes “antioxidant, anti-inflammatory, antimicrobial, and anti-cancer activities” in human bodies. It inhibits the signaling of genes that promote inflammatory activity, according to a 2016 review of the science surrounding luteolin. A 2015 study found that luteolin inhibits gut inflammation in mice, particularly in the cells that line the intestine.

However, since all of these trials employed pure luteolin alone, research has yet to be done on how a daily intake of celery juice could alter luteolin activity in the gut. Your daily celery juice dose probably only contains a small amount of luteolin; it is unknown whether this amount is sufficient to reduce intestinal inflammation.

However, the benefits of a different compound are primarily found elsewhere. Pyrroloquinoline quinone, or PQQ for short, is another substance to be aware of when discussing celery juice and the gut. According to a 1995 study, PQQ is one of those compounds we mostly absorb from our diet. Although it can be found in celery, it is more abundant in broad beans, soybeans, potatoes, parsley, cabbage, and carrots.

A 2013 study indicated that PQQ effectively reduces inflammation levels in people and impacts molecules like IL-6, a pro-inflammatory protein associated with different types of gut flora. Although studies have demonstrated that PQQ supplements benefit pigs’ gut health, it is impossible to pinpoint how PQQ might affect our digestive systems. However, much of the research on PQQ is concentrated on its capacity to aid the liver in healing from the harm brought on by excessive alcohol consumption. 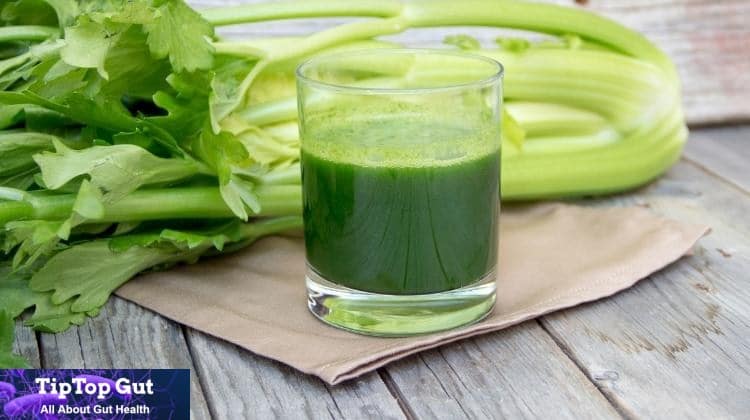 Other Health Benefits of Celery Juice

Celery has advantageous elements. Most people think celery is a pointless vegetable with such little nutritional value. However, it contains some important nutrients that are protective of health.

Celery juice isn’t benefiting your intestines as much as it could. According to a 2008 study, celery juice has a lot of potential as a probiotic beverage, or one that is packed with strains of bacteria that will grow in the stomach and keep us healthy. Although they have been shown to improve gut health occasionally, probiotic beverages aren’t a panacea either.

In addition to being low in calories and a good source of fiber, celery also contains antioxidants, potassium, folate, and vitamin K, according to nutritionist Cynthia Sass. A sufficient dietary fiber and vitamin K intake are linked to a healthy gut.

Celery is a poor choice for your daily vitamin K intake; however, other vegetables are. According to Healthline, celery isn’t the best choice for a vitamin K boost in your juice; instead, choose parsley for kale, collard greens, spinach, turnip greens, Brussels sprouts, asparagus, lettuce, and broccoli.

Celery Is Good for Your Whole Body

Celery juice contains minerals like vitamin k, vitamin c, vitamin b6, folate, and potassium and contains only seven calories and less than one gram of sugar per rib. However, that is only the beginning. Celery juice is an effective treatment for a wide range of illnesses.

Flavonoids are potent phytonutrients with high antioxidant (cancer-fighting) capabilities, and celery juice contains them. While this is not a cancer treatment, those at risk for the disease might want to consider including celery juice in their diet.

A study suggests that celery seeds may shield the digestive tract from getting stomach ulcers. The scientists propose that its antioxidant qualities might account for this.

However, these results do not apply to people because the study’s design employed rats. Understanding how celery seeds may prevent adult stomach ulcers will require more research.

Celery leaf extract might be a supplementary therapy to lower blood sugar levels.

According to a short study, older people with prediabetes who consumed celery leaf extract before and after meals saw a reduction in their blood sugar levels. Blood insulin levels, however, were unaffected.

These findings imply celery leaf extract is a viable alternative therapy for blood sugar management, but larger sample sizes and more substantial research are required to substantiate these results.

When a person’s body contains too much uric acid, they get gout and inflammatory arthritis. Natural waste called uric acid can accumulate in the blood.

The big toes and occasionally the ankles of gout sufferers may swell painfully and hotly. Days or weeks may pass before these symptoms disappear.

Celery has anti-inflammatory qualities; therefore, some gout sufferers might try it as an additional supplemental treatment.

Celery seed extract may help lower ankle edema brought on by gout, according to a 2018 mouse study. However, the effectiveness of celery extract in lowering swelling in humans is unknown because this study only utilized rats.

In a small 2018 study, 39 Iranian students who took capsules with a combination of celery, saffron, and anise extract reported less pain during their periods.

The individuals may have experienced fewer unpleasant cramps after taking the capsules since these substances have anti-inflammatory and pain-relieving qualities.

However, the study focused on more than just celery extract. Larger, more rigorous research is required to determine whether celery extract can lessen menstrual cramps.

What happens if I consistently ingest celery juice?

In addition to having potassium and vitamins A, C, and K, celery juice is low in sugar. Among other advantages, this well-liked beverage may lower inflammation and improve hydration. Celery juice shouldn’t be used to detox your body, as doing so puts you at risk for severe vitamin deficits and calorie restriction.

Will celery help with leaky gut?

A natural antibiotic and anti-parasitic celery juice, routinely consumed first thing in the morning on an empty stomach, will help ward off undesirable intruders for those battling candida, SIBO, and leaky gut and is an excellent source of vitamins A, C, and K.

Large celery juice consumption may increase your risk of developing skin issues. Additionally, typical are allergies to celery. After consuming celery juice, you can be allergic if you experience itching or swelling in those areas of your body.

How often per week should you consume celery juice?

Consider consuming twenty-four to thirty-two ounces of straight celery juice each day if you want to reap even more significant advantages or if you have a persistent ailment or symptom. On an empty stomach, you can either have it all at once in the morning or divide it into two halves.

What time of day should celery be consumed?

After consuming celery juice for a week, what happens?

Your health and digestion can change in as little as one week with just 16 oz of fresh celery juice daily. Celery juice is a highly alkaline, enzyme-rich, electrolyte-enhancing, liver-repairing, blood-sugar-balancing, antimicrobial beverage.

How soon will you feel the advantages of celery juice?

According to Anthony Williams in his book Liver Rescue, celery juice is one of the most potent and healing juices we can consume. Your health and digestion can improve in as little as one week with just 16 ounces of fresh celery juice every morning on an empty stomach.

Are Sweet Potatoes Good for Gut Health? Explore the Truth

Is Milk Good for Gut Health? All Surprising Facts Revealed

Best Probiotic for Gut Health and Bloating: According to Health Expert 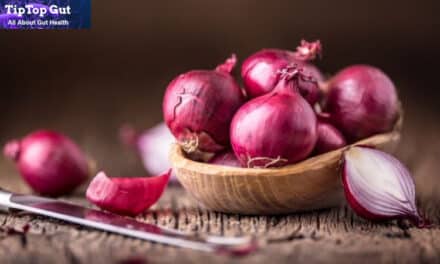